So, a while back, I got this goofy idea to combine two of my favorite things: Shakespeare and Star Wars. I didn’t know if I could pull it off. For one, I didn’t have a pattern for R2D2 and C3PO so I’d have to make them myself. My first few tries were disasters. R2 looked all right, but 3PO always came out looking rather squashed. Then I found patterns online for Gundam Wing character sprites. Inspiration hit and my first-try C3PO sprite looked pretty good.

Now that I had my sprites and quote, how to put them together? I found a nifty medieval-style border in a blackwork book that I modified a bit and put that around the whole thing. But it was still missing something. What else could I add? ROSE BUDS.

In hindsight, I probably should have used lightsabers, but I really dig the juxtaposition of droids and girly flowers.

I have other “Shakespearean Star Wars” ideas I want to explore. But I think I shall find a simpler border to use next time, as this was such a pain in the rear to do.

Haven’t decided if I want to sell this finished piece or not. I like it, but I’ve nowhere to hang it. Woe. 😦

So. I’ve done it. I opened my own Etsy shop, The Crafty Companion. I only have five cross stitch patterns available so far, but I’m planning to add more. I’ve also got some finished stitchings done, but I’m waiting to add those until after I get back from my weekend trip. I’m hoping I’ll make a couple of sales, especially since I’ve got a ton of design ideas.

Finished a few new “Doctor Who” designs recently. One is brand-new and the other two are framable versions of designs I’ve put on bookmarks.

I already had a Dalek bookmark, so of course I needed a Cyberman to go with it!

I used Satin floss to do my Cyberman. Probably won’t do that again, as that stuff is as difficult to work with as the metallic floss. 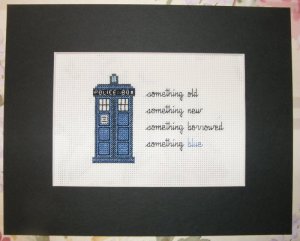 "If something can be remembered, it can be brought back..."

It’s blue on the outside. It’s bigger on the inside. Inspired from the fifth season episode, “The Big Bang.” This finished stitching will be for sale next week.

This guy needs his own fan club.

I really liked the bookmark with this little guy on it, so I had to do one that could be framed. He’ll also be for sale next week. He’ll probably also show up again on a tea towel…

Tagged as cross stitch, doctor who

I bought a pack of blank aida bookmarks off Etsy a while back, because trying to make my own would most likely have been disastrous. I envisioned adorning them in various geeky designs, but somehow, the first five all turned out “Doctor Who.” Not that I’m complaining, really.

This bookmark is bigger on the inside.

My first bookmark of course had to feature the Tardis. Sadly, I totally misremembered the quote from “The Eleventh Hour,” as I did not have access to the DVDs at the time. But I think it works. I may do this again with a different quote or maybe a starry background.

I was totally going to do this with the caption “Go, go Dalek Rangers,” but after reading Mark’s review of “Victory of the Daleks” over on Markwatches.net, I thought “Taste the rainbow” would be more hilarious.

Also from “Victory of the Daleks.” Because nothing is funnier than a Dalek serving tea. This one would have been perfect had I not miscounted and actually got the design centered. A lesson for next time.

Because bow ties and fezzes are cool.

I also have a Cyberman bookmark to go with these, but he’s not quite done yet. I’ll post it when I’m finished, provided I’ve not been deleted.

Tagged as cross stitch, doctor who

I know nothing about Green Lantern, other than he wears green and is afraid of the color yellow. And that there’s a movie coming out about him later this summer. But really, other than that, not a clue. But my brother is a big fan. So when I found this pattern from Wee Little Stitches on Etsy, I knew I had to make this for him. 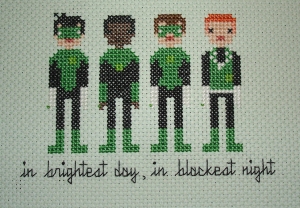 My brother owes me big time.

Tomorrow, I’ll post some of the “Doctor Who” bookmarks I’ve done lately.